Last Updated by Larissa Boiwka on 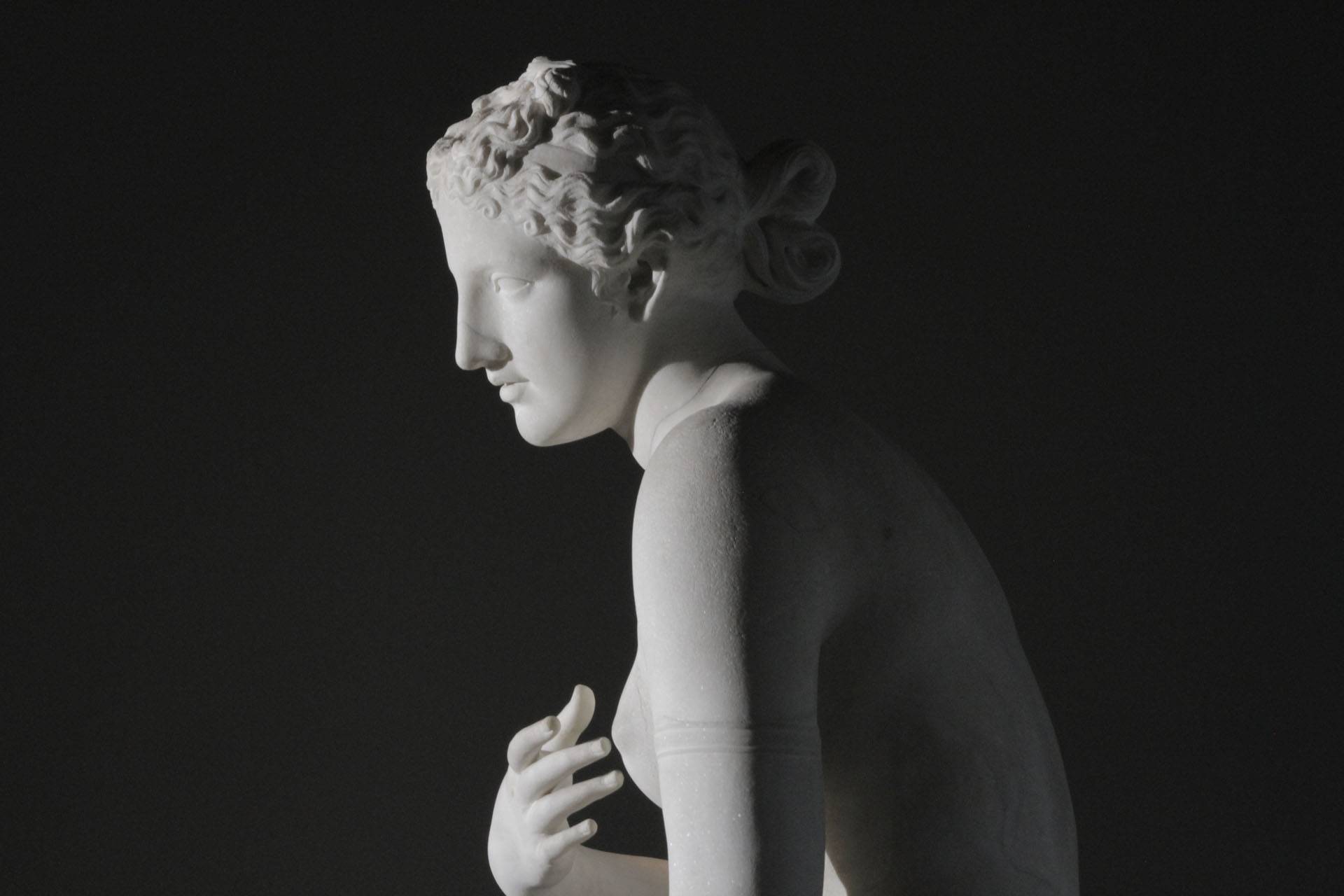 This episode touched upon a lot of points that I address in my work as a corsetière: beauty, body, and form - as well as how we deliberately manipulate these attributes to control perception and desirability. On a daily basis I quite literally alter my client’s bodies by drafting a pattern that gently and gradually molds their body into their personally preferred shape. 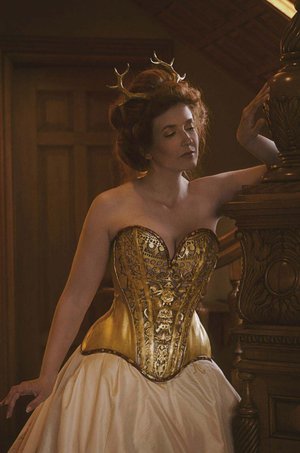 Photo by Rachel Lauren Corsetry can range from mild, gentle foundation shaping for an evening gown or in its most dramatic form, the dedicated daily practice of “tight lacing,” is considered a form of body modification. While voluntarily donning an anachronistic garment may seem archaic and antifeminist to some, I think corsetry can be a powerful expression of one’s will and personality.

Alexander McQueen often said that he created clothing for women in order to shield them against danger. This resonates with me because one could view the corset as literal armor, an elegant cuirass. Director and chief curator of The Museum at the Fashion Institute of Technology Valerie Steel said “women wore the corset because it made them feel attractive and properly dressed, two important indicators of status. However, they were intended to reshape the natural body to what women perceived as the most ideal figure—meaning the most youthful and sexually desirable. Men might not have oppressed women by demanding they wear corsets, but women certainly wore them to impress men and assert their rank among other women.” (Collector’s Weekly, January 2012). I believe that true bespoke corsetry is a powerful art that alters perception of the most important of objects, the human body.

In "How Do We Look," the realistic Faiyum portraits on the mummies reminded me of the famous effigy stays of Queen Elizabeth I. It's remarkably ironic that death and all its associated funerary industries can often be the best preserver of cultural artifacts. The body corrupts, but the artifacts remain through disuse. In antiquity, corsets were very useful, practical garments whose creation involved a great deal of labor, and they were often worn until they fell apart. And so, we are fortunate to have this rare example of stays of this time period because they dressed a funeral effigy and did not suffer daily use. 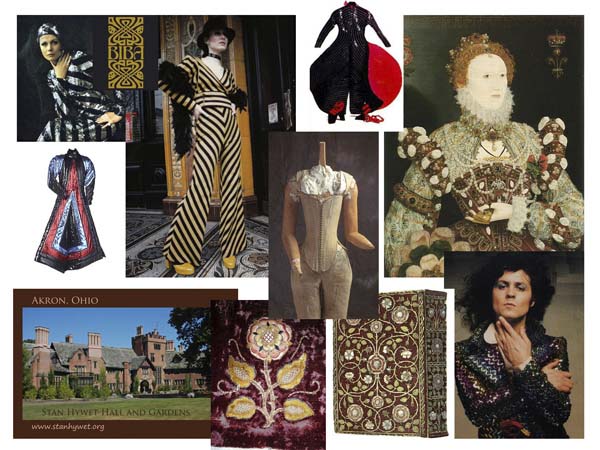 Mood board for the Semper Eadem Corset.Courtesy of Larissa Boiwka

I chose those effigy stays as a starting inspiration point for my work the Semper Eadem corset. Semper Eadem was Queen Elizabeth I’s motto meaning “Always the same,” or constant, unchanging. I selected the motto because fashion through its myriad permutations always cycles back to its starting point. It’s a strange kind of constancy. My inspiration for this corset traveled from the beautiful austere shape of these extant stays to Tudor art and aesthetics, the exceptional life of this British monarch, and finally terminated in Glam Rock - more specifically David Bowie. Yeah, I know…it’s a leap. Stick with me for a minute. Glam Rock and Tudor fashion are both about conspicuous consumption, perception, luxury, and status. I wanted to see what would happen if I fused the aesthetics of two remarkable people I admired for their individuality and innovation into one garment. The Semper Eadem corset emerged as a sort votive or effigy to traits that I personally would like to absorb.

I think we can all benefit from examining how we conform to culturally imposed aesthetics and why we choose to do so.

I struggle a lot with what our contemporary American culture places value in. Things that I assign nearly holy beauty to are discarded, whether it is a Second Empire home on E. Long St that was allowed to be demolished or if it is a beautiful African American girl who is told she in not X, Y, or Z enough because she doesn’t conform to the mold -- the modern Kore (Greek maiden) mold, if you will, with the vacant eyes and the placid smile we saw in our episode. The traits and attributes that are elevated in contemporary society seem a hollow inauthentic echo of what they should be. So my professional work and my personal sartorial time-traveling explorations in historical fashion (creating Victorian corset replicas for PBS, or creating 18th century stays for a ball in a European castle) are I think an attempt to retrace our steps as a culture and figure out where things went wrong - hopefully with some degree of humor and self-deprecation. In recent years it has become clearer to me that my work is coalescing from an unconscious rejection of contemporary beauty ideals into a more deliberate provocation. 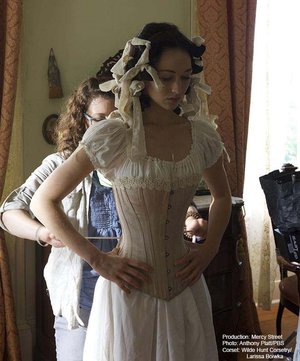 Photo by Anthony Platt/PBS I think this is why I had such an immediate visceral appreciation for Kehinde Wiley’s work from the first time I viewed Portrait of Andries Stilte II at the Columbus Museum of Art. The swagger (like Tudor or Glam Rock fashion) and reclamation of power in his work is very inspiring to witness. It’s an important reminder that we all ultimately control our own narrative. I won’t pretend I was that self-aware when I created the Deco dress, but on the set of the photoshoot for it, that simple dress turned into to a representation of something more to me. I had created the dress out of gold metallic leather and impulsively trimmed it with great long tracks of blonde hair extensions. I did it because it looked great, but perversely, I also thought it was hilariously grotesque and it reminded me of a blonde cruelty-free version of Colobus monkey fur that was so popular in the 1920’s. But as I watched our beautiful model the Haitian-American, Ludie Senatus style her spectacular Afro hairstyle for the shoot, that ultra-blonde, ultra-straight hair weave became relegated to status of almost a trophy pelt trimming the hem of a dress - which I found both hilarious and powerful. How many women spend countless hours and dollars chasing that ideal of straight blonde hair, and why? I think we can all benefit from examining how we conform to culturally imposed aesthetics and why we choose to do so. Does it really please you or are you just seeking acceptance? I’m looking forward to continuing to explore and develop my own aesthetics and I hope to encourage and inspire you to do the same. 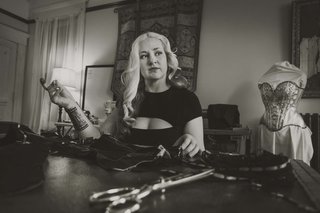 Larissa Boiwka. Photo by Chris CasellaLarissa Boiwka is a professional artist and corsetière living in the beautiful and historic Olde Towne East neighborhood of Columbus, Ohio. After studying Meso American, Near Eastern, and local Paleo-Indian Archaeology and receiving her degree in Anthropology at the Ohio State University, her passion for culture, clothing, and costume collided and led Larissa to found Wilde Hunt Corsetry, a business that provides artistic bespoke corsets to clients worldwide, including PBS’ own American Civil War miniseries Mercy Street.